I have a new blog! It's over at my new website. So make sure to go over there for new posts as this blog will be closing soon! 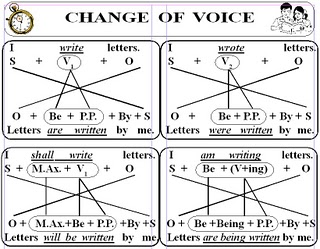 On another of my posts, I've had some social commentary from a reader who corrected me on something I said to another commenter about passive vs active voice.  Ultimately she was correct, what I'd originally said was active was, in fact, not active voice. However, I disagreed with the example she used to demonstrate her point, as it didn't use the original examples and confused other readers who emailed me to ask what in the heck she was talking about.  :)  So I decided to do a post on passive vs active voice.

In my search for references, I went to my trusty grammar divas who already covered this topic.  Since they said it better than I could, I'm just going to copy and paste it below, with a few more links to places that have posted on this.

Passive voice is one of the most difficult grammar issues fiction writers struggle with every day. It’s the redheaded stepchild because it’s awkward, wordy, and generally vague. Active voice tends to be crisp and direct. Ergo, to ensure your readers understand what you’re trying to say and enjoy doing so, active voice is your best bet.

You’d think knowing what voice to use would be easy because there are only two: active and passive. However, many a writer has ground teeth, pulled hair, and/or stomped feet trying to rewrite a sentence into active voice that his or her editor or critique partner has marked as “passive”.


The voice of a verb shows the strength of the subject of the sentence. Not physical strength, perception strength. Editors feel active voice is more direct, dynamic, and—literally and figuratively—active because attention is directed at the “doer” of the action. Passive is, well, too passive for most commercial fiction.

In the active voice, the subject of the sentence takes the action of the verb, i.e., is the actual “doer” of the action. Let’s use a familiar joke to explain.


Why did the chicken cross the road?

The chicken is the subject of the sentence, i.e., the doer of the action. This is active voice.

Why was the road crossed by the chicken?

Active voice is when the subject of the sentence takes the action of the verb, i.e., is the actual “doer” of the action.

John threw the ball across the road.

The spider bit Samuel under his swimsuit.

Passive voice is when the subject of the sentence is acted upon.

The ball was thrown by John across the road.

Samuel was bitten under his swimsuit by the spider.

Passive voice is not any use of to be (in any form). The key to identification is:

Must Have #1: form of “to be” + past participle = passive voice. (Does past participle sound like the latest energy drink? Think a verb form ending in –ed that expresses completed action. Of course, there are a few exceptions like paid, thrown, bitten, and driven.)

Must Have #2: A receiver of the action (a direct object) that is the subject of the sentence.

May Have #3: The doer of the action is in a prepositional phrase that begins with by or sometimes for. Why may have?

Not all passive voice sentences contain by or for.

Summer was surprised by the prince’s generosity. = passive voice

Adrianne’s coming-out party was held by her parents. = passive voice

Tired of editors, contest judges, and/or critique partners circling every was and marking it passive? What they forget is that only transitive verbs (those taking objects) have a passive voice form.


John threw the ball across the road. = active voice

The ball was thrown by John across the road. = passive voice

However, linking verbs (not helping forms) only suggest state of being and can’t have a passive voice form—though some people interpret a state of being as a passive form. Well, maybe, but it’s not a grammatical VOICE form.

John was a teacher. = active voice

The teacher was John. = active voice

Confused? Remember, a linking verb does not show action. It connects a word or words in the predicate (the verb and any objects, modifiers, or complements associated with the verb) to the subject in the sentence. Forms of to be (am, are, is, was, were) are common linking verbs. Others include grow, look, became, appear, look, taste, and remain. Because linking verbs don’t show action, they can’t be active or passive.

Why is avoiding passive voice so important? Passive voice is a grammar issue the fiction writing community—especially within the romance genre—takes seriously. Passive voice is not grammatically wrong, but most editors feel active voice is more direct, dynamic, and—literally and figuratively—active because attention is directed at the doer of the action. They see passive voice as passive writing bleeding onto the page. They see an author unwilling to grab a hold of their prose and commit to producing strong, aggressive writing.

Passive voice can also drive a reader insane with its contorted, artificial structure. And we don’t want to drive our readers crazy, do we?

How to Fix Passive Voice
It’s easy. Simply switch the sentence order to make the doer and the subject one.

The tablecloths were discarded after the party by Cheri.

Cheri discarded the tablecloths after the party.

After the party, Cheri discarded the tablecloths.

Jackson was wanted by every woman in the bar.

Subject of the sentence? Jackson. What’s the action? Wanted. Actual “doer” of the action?

Every woman in the bar. Ready? Switch!

Every woman in the bar wanted Jackson.

Is Passive Voice Ever Okie-Dokie?

Sometimes the object of the action is the important thing, not the doer. Here, passive voice is the better way to go.

On Tuesday, Mysia’s car was turned upside down by that maniac. = passive voice

Sometimes you have a sentence with two clauses. Here, passive voice creates a shift in subject that makes the sentence flow.

As the Laird surveyed his lands, his enemies plotted treachery. = active voice

As the Laird surveyed his lands, treachery was plotted by his enemies. = passive voice

Sometimes the doer of the action is unknown and therefore we must use passive or rewrite the sentence.

Sometimes the detachment between the subject of the sentence and the doer of the action works for stronger prose.

“He’s round sunburned face was marked by a certain watchful innocence.” Reflections in a Golden Eye, Carson McCullers.

Here, the emphasis is on innocence. Rewriting the sentence into active voice would ruin the author’s intent.

“You can be defeated and disoriented by all these feelings.” Bird by Bird, Anne Lamott.

Here, the emphasis is on you. A rewrite would kill Anne’s masterpiece.

“The body lay on the back, the head toward the door. A candlestick was yet clutched in the right hand.” Wilderness, Robert Penn Warren.

The last sentence, in passive voice, delivers a dramatic punch.

Jane was taken to the cleaners.

Idiomatic phrases allow us some liberties. Not many editors would poo-poo a sentence like this one.

What About Passive Voice in Dialogue?

1) Write the way you speak and your writing will be more lively, powerful, and engaging than writing the way you think writing should sound.

2) Still not sure whether to go passive voice or active voice?

3) Try both and decide what sounds smoother.

4)Still, still not sure? When in doubt, go active voice.

5) Don’t worry about passive voice until you’re in the editing stage of your manuscript!

List of other sites that talk about passive vs active voice.